LCR 4.0, a brand-new business support programme for the manufacturing sector, officially launched last night in Liverpool. The event was attended by over a hundred guests, including leading industry journalists, forward thinking manufacturers, and education professionals. A number of business were on show to demonstrate their new technologies that are helping to bring manufacturers into the 4th generation of the industrial revolution.

Industry 4.0 follows the 3rd era of industry, which included the beginnings of automation, when robots and machines began to replace humans on the assembly line. And now, Industry 4.0 sees an integration of computers and automation coming together in a new way, with robotics connected to computer systems via remote systems, equipped with machine learning algorithms so they can begin making informed decisions and control the systems with minimal input from human operators.

The initiative aims to raise awareness, and help UK manufacturers to begin to integrate some of these smart systems to raise the industry standard, and ascertain a collective, worldwide competitive advantage.

The companies on show were some of the brightest in their field, making a significant impact on the industrial development with Virtual Engineer Centre (VEC) (University of Liverpool), Brainboxes, Hartree, and LIMU and Sensor City were among those on display alongside Valuechain. 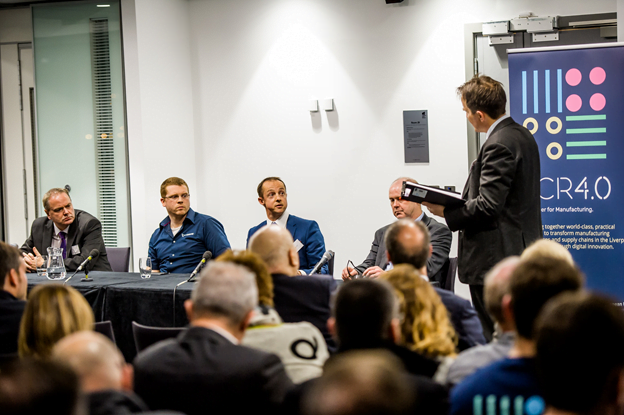 The event was hosted by Chris Maguire (Editor of Businesscloud), and featured speeches from Steve Warren (EEF), and Jon Hague (Unilever) regarding the current state of the industry. These were followed by a panel discussion with the two speakers, and Luke Walsh (Brainboxes) and our own, Tom Dawes (Valuechain), where the topic revolved around what’s currently being done to embrace Industry 4.0, and raise awareness of the new possibilities for large and small manufacturers alike.

Key talking points included: The need for well-educated graduates to provide forward thinking; the need to raise awareness of manufacturers to the long-term benefits that these changes can bring; and the need for collaboration throughout the manufacturing process and entire supply chain, including the sharing of vital business intelligence, to improve individual and collective competitiveness.

The launch proved that the future is bright for manufacturing, with LCR 4.0 playing a vital role in raising awareness and creating a collaborative platform to promote the benefits, and key possibilities for manufacturers.