As a young person leaving school in 2016, I had long before decided that continuing on to college and University was not my goal. Despite scoring well on my GCSE’s, I wanted to begin my career sooner rather than later. As a result, I started searching for an apprenticeship in Digital Marketing, a skill I was keenly interested in. By the time I found Valuechain’s job advertisement, the position has already been filled. However, seeing my enthusiasm and willingness to apply myself to any task given to me, CEO Tom offered a slightly different role of Management Apprentice.

The flexibility offered within this role would enable me to gain key business skills, alongside completing my apprenticeship. The opportunity to shadow the CEO was exciting to me, and upon meeting him he explained his vision for Valuechain, one that appealed to me. I could see that the company was growing quickly, and that it would continue moving forward at pace. It was something I was interested in being involved with.

After my interview with Tom, I was taken to meet the team that was only small at the time, but friendly nonetheless, and I was offered to start working the following day, which was to be a management meeting. Having no previous experience of working for a limited company, I was greatly anticipating learning more about the day-to-day running and maintenance of a company.

I was introduced to the board of directors, and allowed to sit in on the management meeting to take notes.

I was quickly and efficiently trained on the software that I’d be expected to use, and support was available when I needed it. My apprenticeship with QA started soon afterwards, which greatly improved my ability to work independently by travelling into Manchester for a week every month. What I was learning in class was clearly enhancing the skills I was learning in the workplace, and my varied role provided a wealth of opportunity to practise my new methods. 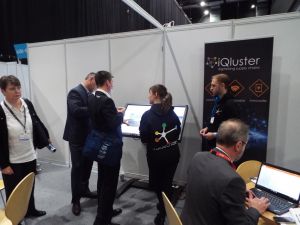 I was encouraged to work with each of the teams within the business, and making myself available to everyone allowed me to learn so much more about processes including marketing, project management and development. There was always great potential for job progression, and my line managers were attentive to where I wanted to steer my career. Tom would regularly check in with me, despite his busy schedule, to make sure that I still enjoyed what I was doing. I agreed with Tom’s motto for hiring, get the right people, and make them want to stay.

My time at Valuechain has opened my eyes to a great deal of aspects in the business world, and I would definitely encourage anyone considering applying for a job here to do so. You’ll have the opportunity to expand your knowledge of interesting fields of work, find satisfaction in tackling challenges, and work with a great team of hard-working friends. The company is progressing at an amazing speed, and you don’t want to miss the chance to be involved!